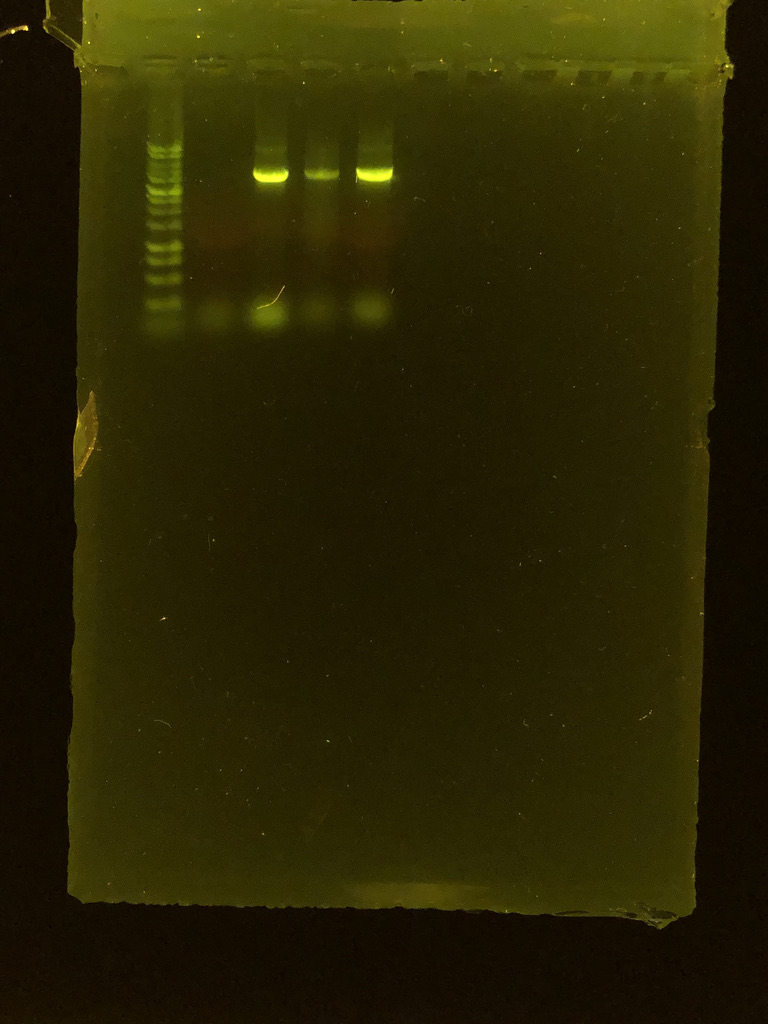 This is an electrophoresis gel showing some DNA we synthesized last year by PCR (Polymerase Chain Reaction). See the blog for more details.

Thus, in the presence of an electric field, the DNA will move towards the positive electrode. That's simple enough. It's also important that each new base adds one new negative charge. So, the charge-to-mass ratio is constant. As a result, if I were just allowing the DNA to move through water with some salt in it to conduct electricity, the force (due to charge) increases as mass increases, and acceleration is constant.
However, if I force the DNA to move through some sort of a gel, where big things have a harder time finding a path and small things can fit between the molecules of the gel easily, then small pieces of DNA move faster than large ones.

If you log into your Benchling account and try this link, you should be taken to the page in my lab notebook with the procedure for pouring and running an agarose gel. I hope the link works. A liquified gel is poured into a holder and allowed to cool until it solidifies.
I chose the picture below because it shows the "wells" at the top of the gel. Each of those little holes is made by including a "comb" when you pour the liquid gel. After it solidifies, you pull the comb out, leaving holes. You load your DNA sample in a well, turn on the power and the DNA moves toward the positive pole, in this case at the "bottom" of the gel as you are looking at it.

Loading the gel takes some practice. You may have done it in a previous class. A different sample is loaded in each well and allowed to "run" in the electric field. The larger ones are near the top of the gel. Each band you see is somewhere around 100,000,000 copies of DNA of that particular size.
The first lane with visible bands has a size standard. That is, I know what the size is of each of the bands and can compare it to the bands in other lanes to know their size. In that lane, the top band is about 12,000 base pairs long and the smallest band is about 500 base pairs.
I think this is enough to start you off. You can also look at the wikipedia page on the topic.

This is a picture of a gel box and power supply in the back of my lab.

The picture below is not directly related to this blog. It's a picture of bacterial cells harboring the plasmid I showed, pSG25, which has green fluorescent protein under the control of the Lac repressor. The cells on the left do not have the Lac repressor and the ones on the right do. As you can see, the repressor turns the level of GFP way down.