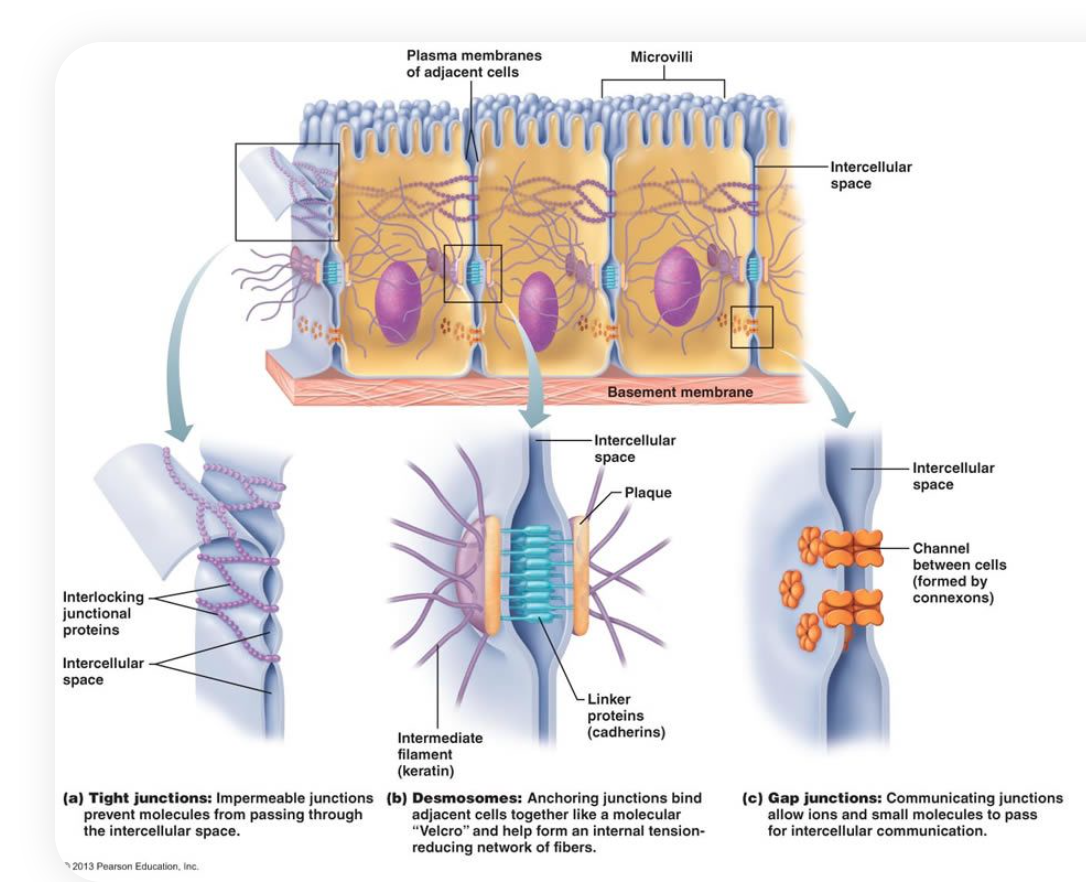 Today we discussed the cytoskeleton. A lot was covered about how the components of the cytoskeleton proved structure and movement…of the cell; of organelles in the cell and even of organisms. The structures and, where applicable, their motor proteins, are too valuable as inventions of evolution to stay in their original limited role.
One detail I failed to mention is that there are multiple versions of some of he proteins, particularly the motor proteins. The version of myosin that works in muscle is encoded by a different gene than the intracellular myosin. There are specific versions of tubulin just for the sperm flagellum. But, the genes are easily recognizable as descended from an original form. There can be important structural and functional differences.
Intercellular integrity
We need to talk a little about how in a multi-celled organisms cells have to stick together to form tissues. This will involve the cytoskeleton and specific junctions between cells. The diagram in the header, and repeated below, shows you some of the junctions.

The diagram is not complete. In addition to the desmosomes, there are "Hemi-desmosomes" or half desmosomes on the bottom of the cell. They anchor the cell to a meshwork of proteins such as collagen via specific membrane proteins. You don't need to know the names of the proteins. There are also focal adhesions and adherens junctions that are not shown. All of these except the tight junctions and gap junctions, the idea is to link the cytoskeleton of cells to each other and to the "basement membrane" of collagen and other "extracellular matrix."
This is achieved in every case by specific trans-membrane proteins that link through other specific linker proteins to the cytoskeleton on the inner side of the membrane and to either an extracellular matrix protein or a matching protein on the next cell. This provides integrity to the tissue.

Desmosomes and hemidesmosomes link to the intermediate filaments. As you would expect, these are especially important when cells are not going anywhere and need to resist substantial force.
If you want to be a little grossed out, look up epidermolysis bullosa. It's a genetic condition in which hemidesmosomes don't form. There was a movie made once about a man in England who lived into his 20s with the condition. I think it was called "the boy without skin" or something like that. Basically, his skin didn't stay attached to his body well.

The junctions not shown, such as adherens junctions and focal adhesions are linked via specific membrane proteins (including integrins, which I studied for years) and cadherins that are linked to the Actin cytoskeleton. These are more easily moved about and are not generally used for things like anchoring skin cells.

Gap junctions are mediated by structures called "connexons" shown below. 6 copies of a protein called

"connexin" (aren't we clever with names) form a sort of an aperture that can be opened or closed. They open only when connected to a connexon on a neighboring cell.
This allows the cells to be coupled. Small ions and molecules can diffuse through the gap junctions. The pore is large enough to admit molecules up to about the size of ATP.

Tubulin is not that intimately involved in the structural integrity of the cell. However, it is involved in a number of structures that are critical for functions. We will spend some time later on addressing the mitotic spindle, which uses the motor protein dynein to separate chromosomes and divide them as the cell divides. We have already looked at how vesicles get moved by kinesin along the microtubules. You should take a look at this video about "john the motor protein."

Here is a look at the "axoneme" of a flagellum, first in an electron micrograph and then in a cartoon. The latter is more informative. By having the outer tubes attempt to move along each other while being pinned at the ends, the motor proteins cause the flagellum (or cilia…the difference is size) to undulate.